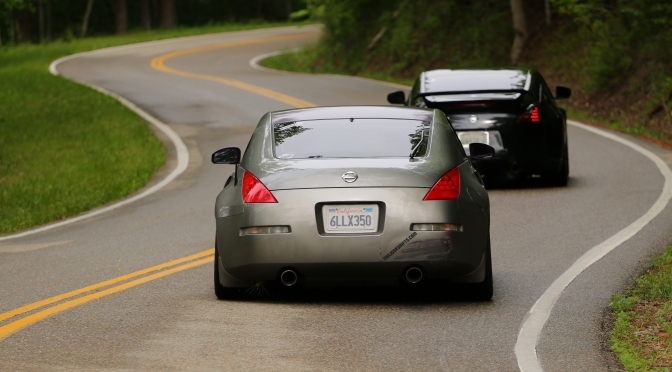 2. Fly to Texas to pick up race car aka Z32 from EPRacing.

3. Bring car to the Tail of the Dragon for ZDAYZ.

1. Get notice Sunday that the car was not going to be ready.

Passing a few states, visiting my mom on Mothers Day in Arizona, getting into Dallas Monday.

Visiting the guys at Courtesy Nissan, getting the Z washed, and grabbing some lunch with them on my quest to find the road trips best BBQ we went to Bone Daddy’s… super good food, and for the fellas there were scantily clad dressed women.

Needing to kill a few hours we took the Z to a few spots and did a photo shoot around Mckinney and Plano;

Getting an invite from Billy at Courtesy to come to Mad Mikes house for a BBQ/party we decided to stay another day in Dallas. The next morning we cruised out bright and early with Mad Mike and Tetsu from Japan who were both also going to ZDAYZ.

We parted ways with Mike and Tetsu around the Birmingham area and we headed north while they headed towards Z1. We made it to Chattanooga Tennessee later that night and met up with the guys and gals from Louisiana and cruised up with them for the rest of the road trip to Tail of the Dragon. Stopping at a Walmart on the way for some necessities.

A few rolling around ZDAYZ pictures;

Cant forget Beer-limpics… well i’m sure some did.

A couple shots around Deals Gap and The Dragon;

Here is the #Selfie video if by chance you haven’t seen it yet… I’d like to think of it as a funny video yearbook of what really happens at ZDAYZ;

Since the Dam Photo was cancelled due to weather, we decided to venture off and check it out and take a few photos as well…

And who can forget Nissan making the 2015 Nismo 370Z debut at ZDAYZ!! (Those seats are to die for)

Before leaving Sunday morning, Aaron-winner of the best tape job and I cruised by the dam and did a few donuts around him.

The day we left, we cruised out with the Memphis Z Club and took more pictures. Once we got to Memphis we got some amazing BBQ.

Cruising out of Memphis back to Ft Worth were I visited Mitch at EPRacing… oh yeah and my race car 😀 It’s so close!!!

The next day I started my long journey from Ft Worth back to Phoenix where I was going to be drifting in a Car Street Journal event, but it got postponed until June. Instead of sitting around, we decided to go to the big car show that happens every weekend at the Scottsdale Pavilions. Met up with Shane Schuller, Simon Parsons, Nicole Ellan, and Rebecca Nguyen.

Please take some time to go to my 'Links' section below on the right side of the screen... These are great people and great companies involved in motor sports that I want to recognize!