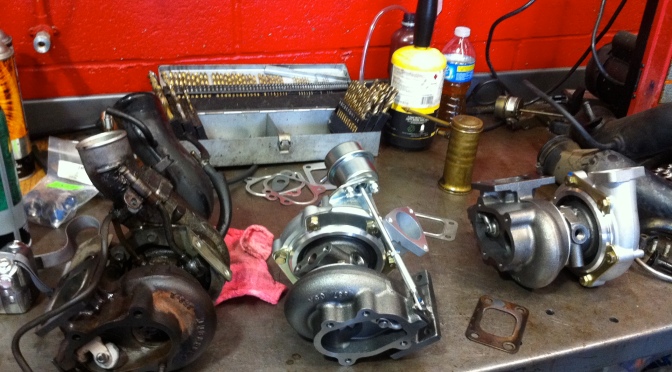 So here’s my long awaited update for my second set of Godspeed turbos for the Z32.

The Story of how the turbo went boom…again;

So this last Friday (Jan. 4th 2013) I drove my car to work- about 25 miles. Smiles ear to ear, since I had been driving something much slower for the two days before, life was good friday morning.

I clock out, and one of my customers tells me that I have oil coming from my car… I look, and there is a massive oil/trans fluid ‘dump’ under my car. I assumed it was something associated with my transmission since we had just swapped the clutch.

I decided to start up my car to see if I heard any knocking or any signs of oil starvation… nothing. sounded lovely. So I let it warm up a second and get going on my drive home. I made it to the stop light at the top of the hill, took a right and gave it a little gas to feel it boost. As soon as i got into boost I heard a really loud squeaky belt sound that only came on after that every time I pushed the gas pedal… The Z still was running fine, so I turned my music louder and was just hoping to make it home and start taking things apart in the garage.

As I merged onto the freeway, I get up to speed-not trying to boost. I get about 1/2 mile before I start smelling something burning, not electrical. I knew I had to renew my AAA and there was a AAA at the next exit… I knew at this point I wasn’t going to get the Z home, but I wanted to get off the freeway and get a tow.

I made it another 1/2 mile or so until my cabin started filling up with smoke rapidly. I rolled my windows down, turned off the car, and coasted as long as I could to the side of the freeway (on a bridge btw) about 1/2 mile from the next exit… I was so close!

I call AAA, renew my membership, and wait for the tow truck. Once he gets there I keep getting a lecture about how illegal my car is, and that it’s not covered under AAA’s basic membership. I told him I hardly drive the beast and that it’s never been an issue before, just put some blocks under it, and dont worry about breaking the front bumper-it’s flexible and zip-tied on for the most part. After signing a waver for damage, and a mouthful of lectures he whips out the blocks and starts getting my car onto the flat bed.

After a minute or two of driving, the tow truck driver told me a good Datsun joke… let me try to reenact this;

Tow Truck Guy “So do you know how Datsun got its name?”

Me “I don’t remember, I wanna say I do, but I cant remember”

Tow Truck Guy “Back in the day, they were in a meeting, and the head guys gave a date that was coming up rapidly, so the other guys said ‘DATSOON'”

I lol’d. I was being serious trying to show off my Nissan knowledge.

Anyways. Jokes aside. We get to the shop I take my car to from time to time (California Import Auto). I got a phone call from them today saying that my left turbo was leaking mad amounts of oil and it was leaking onto the downpipe and probably heating up causing all the smoke to happen.

Next; Getting my car to my garage… do another engine pull and get those turbo’s out and really check em out.

Please take some time to go to my 'Links' section below on the right side of the screen... These are great people and great companies involved in motor sports that I want to recognize!